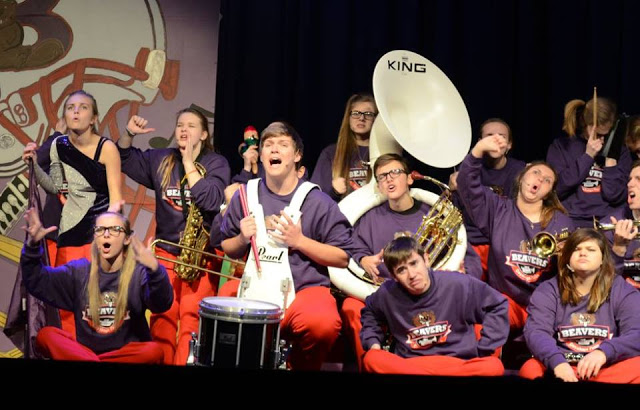 If you missed the first run of Pittsburg High School Theatre’s musical, “Band Geeks,” you have another chance to see it during a special encore performance Tuesday before the cast and crew head to the “State Championship” of theatre: The Kansas State Thespian Conference in Wichita.

I recommend you not pass up the chance.

Each year, every school in the state is given the chance to qualify to perform their shows at state, but only four are selected. PHS hasn’t qualified for five years. It was both an honor and an accomplishment, say cast members and Director Greg Shaw, for “Band Geeks” to be chosen. 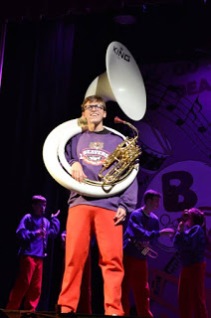 I fell in love with “Band Geeks” before the lights even went up on stage when I saw it back in November. All it took was a look at the last page in the printed program: “What’s a Band Geek?” As a former “band geek” myself — all four years at PHS (1984-1988) as well as at Pittsburg State (1988-1991), I could relate to every single one of the 21 bullet points:
• You roll step everywhere
• You’re walking behind someone and you’re in step with them
• You’ve never had to pay to get into a football game
• Etc.

The show itself is a celebration of the tribulations of the millions who have spent football halftimes pounding out Sousa-like renditions of “Maria.” Whether you were in the band, on the team, or in the stands, you’ll recognize the woes and revel in the fun.
The plot is simple: With just a few members and dwindling funds, the Marching Beavers are close to extinction. When a troubled athlete is relegated to their ranks, Elliott, the tuba-playing band captain and Laura, his best friend, must find a way to unite the band, embrace their inner geek, and save the Marching Beavers.

The dialogue is clever, drawing side-splitting laughter equally from my teen son, my 75-year-old mother, and me. In an ironic twist, it also showcases the talents of the PHS Band, which has seen a surge in growth and popularity in the past few years thanks to Director Cooper Neil. Neil conducts the “pit orchestra” for “Band Geeks,” and a few of his real-life band students are featured as principal characters in the show, including drummer Jack Warring, the troubled athlete who joins the Marching Beavers and is asked to play percussion, and drummer Andrew Ortolani, who plays the director of the Marching Beavers, Mr. Hornsby. Many of vocal music teacher Susan Laushman’s students lend their talents, as well.

PHS Theatre rehearsed “Band Geeks” all day Saturday, will rehearse again this afternoon, and will perform its encore show on Tuesday, Jan. 5, at 7 p.m. at PHS, before leaving for state on Wednesday. Shaw is asking audience members to make a minimum donation of $5 at the door, with all proceeds from the show helping to pay for the students’ trip to state. In Wichita, the performance will be held at the Wichita Hyatt Regency at 7 p.m. Thursday. (The cast and crew will have 12 hours to unload the entire set, equipment and costuming, conduct sound checks and run through a dress rehearsal!)

One last note about the calibre of this cast: Many cast and crew members in “Band Geeks” also rehearsed throughout Christmas break for “Shrek, The Musical,” which will open in February. And Warring, a senior, who won the title role of Shrek and will perform “Band Geeks” at state, also must remember lines to another show he’ll perform at state: “James and the Giant Peach.” He earned a spot on the cast of the Kansas State Thespian’s All State Play, which has rehearsed that show throughout the past year. In athletic terms, this would be the equivalent of him being a starting player on three teams at the same time.

Take a few hours Tuesday to support these talented and dedicated young people who will represent Pittsburg for the entire state. You’ll benefit, too: It’s a well-done, humorous production that will leave you feeling good.